Lovecraft in Croydon (with apologies to The Mountain Goats) 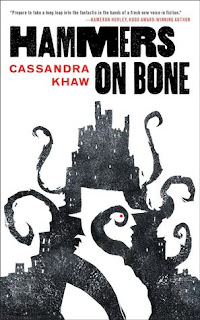 
This is another in Tor.com’s excellent novella series. Seriously, I haven’t read one yet that wasn’t worth my time.  Good, good stuff.

In this one, John Person is a hardboiled PI in London. He’s also a monster stuffed inside a man suit.  As the story opens he’s hired by a kid to kill his stepfather.

The basic concept and story here were pretty good. Great pacing and use of the mythos.  Questions are answered, but new ones raised to prompt the reader to read more in this world.

That being said, I did have some problems.  First, the hard boiled narration seemed rather arbitrary and forced.  Why was this happening? And it seemed to be somewhat inconsistent, especially as the story neared its end.

A side effect of the narration is that the sense of place was ruined (for me at least).  For a book set in London, it certainly didn’t feel like it. Not even in the real/fake sense of “book London”. It could have been set anywhere.

Finally I think that it may be a bit too dependent on mythos language.  I think that there are several things that would make no sense to someone who didn’t already have a familiarity with Lovecraftian language.

I liked the novella, but on the whole found it disappointing, and one of my least favorite of their novella series.