Dreaming of a Better Past 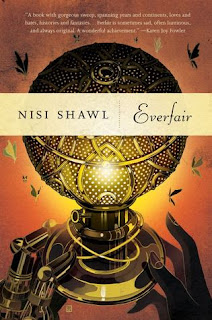 A couple of years ago, it seemed like steampunk was everywhere & there was a lot of conversation about the subgenre.  One of the major critiques was that its emphasis on exploration and derring-do simply reified the colonialism of the past.  Everfair is a giant rebuke to that style of steampunk.

What if the history of the Congo changed? Shawl’s forces of liberation have steam technology earlier, and a coalition of English socialists, American ex-patriots, fleeing slaves and workers, and tribal forces fight and defeat the forces of King Leopold.

This is a big big story that includes a couple of generations and takes place on multiple continents.  And I think that leads to the biggest problem. In order to get this huge story in a single volume, there are big jumps in narrative and characterization.  Ultimately my complaint is not that action takes place off screen (although that is a bit of a problem), but rather that I felt it hurt characterization.  A more slow and patient development would have helped particularly in a story that has so many characters.

It’s sort of a backhanded complaint isn’t it? The problem is that I want more! But there you go
Posted by Burgoo at 9:38 AM