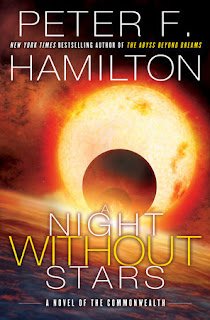 I have to say that I would have read this differently 6 months ago.

The world of Bienvenido is governed by an authoritarian government.  They are fundamentally conservative with a small “c”.  They actively restrict change.  Hamilton focuses on technology, but there would obviously be social indicators as well.

There’s a persecuted minority group, “Eliters”, who of course we as readers know would do a much better job of solving the very real problems confronting them.

Hamilton puts a layer of communist semiotics on top of his authoritarian, just in case anyone doubted his free market credentials.

So here we are in a time of rising fascism, and I’m trying to read this book where one of the major characters is in fact a member of the authoritarian police force.  We are shown torture and disregard even for the people who cooperate with the police.

It should have been a big fun time reading space opera with aliens and clones and androids.  With crazy advanced technologies.

Instead it was too much a vision of the repression of today and tomorrow.
Posted by Burgoo at 10:30 AM