The Future Is Hot 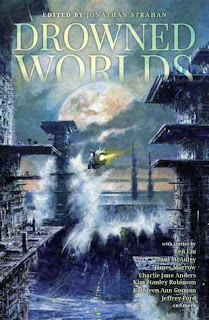 Climate change is the major issue of our time.  Here in the US, we are still mostly in denial, with a large portion of the population simply denying the scientific truth of the matter.

One of the arguments for science fiction is that it allows us to envision potential futures, both good and bad.  We need to work our imaginations so that we are ready for change.

With that in mind, it’s somewhat surprising that climate change is not a more common theme in contemporary SFF.  Drowned Worlds steps into this gap & provides a selection of stories from some of the best writers working today.  Kim Stanley Robinson, Ken Liu, Paul McAuley, Charlie Jane Anders, Lavie Tidhar—from the established to the young upstarts, Strahan has done a great job of selecting talent.

As you would expect from such a star studded assortment of writers, the work is top shelf.  Skill, craftsmanship, vision – it’s all on display.

My only complaint would be that at times it was just too damned depressing.  And I know, that’s as much a problem with me as with the text.  But that sense of sadness is real.

This isn’t going to be the most upbeat anthology of the year.  But the subject matter is important.  And the writing really can’t be beat.  So go on & read it already!
Posted by Burgoo at 9:46 AM