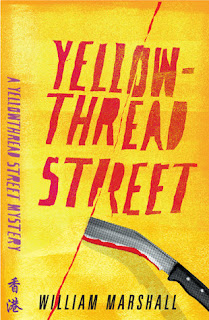 What a great surprise this was!

Apparently this is the first in a series originally published some years ago, brought back into print by Farrago.  Thank you!

Imagine Quentin Tarantino filming an Ed McBain story where the script was written by Elmore Leonard.  But Tarantino moves the whole thing to HK!

That’s the sort of thing we have here.

Violent, profane, and hilarious!  A great summer read!
Posted by Burgoo at 9:34 AM