All He Wanted Was A Drink 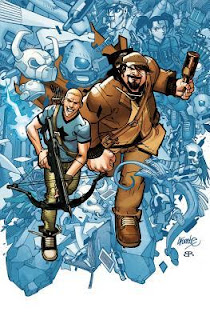 This is my first taste of Archer & Armstrong, though I’m aware of some positive buzz about the book for the last few years.  Jumping in with this volume, it felt a lot like trying out comics back when I was a kid.  In other words, I had to piece some things together. No one spoon fed me a ton of backstory, but I was able to keep up.

Armstrong seems to be somewhere between The Doctor & The Master on the continuum of hero to villain.  He doesn’t really want to help anyone or save the universe, but neither does he want to conquer the world.  He’s immortal, but he’s also a drunk & selfish.

Archer is his companion.  He’s young & naive, & seems to have his own crazy back story.  He thinks the best of people, even when he shouldn’t.

This particular story is what happens when Armstrong decides to go into his Bag of Holding to get a bottle of booze.  It turns out that the bag is full of people who are a bit pissed that Armstrong has shoved them inside over the centuries.

This book was a huge amount of fun!  It has action, comedy, betrayal, and more! It’s light & fun without being stripped of some serious character moments.

David Lafuente’s art is a wonderful fit for the tone of this book.  It’s expressive & conveys action and fantastical concepts without being overdone.

My only complaint with this book is that it is too short!  I want more!
Posted by Burgoo at 10:01 AM