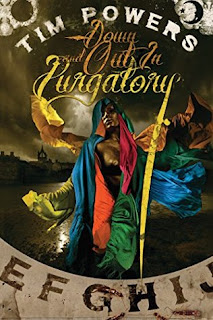 Tim Powers “Down and Out in Purgatory” (Subterranean Press, 2016)

You’ve got to really hate someone to want to kill them after they are already dead.

The oddball premise of this short book – and it gets creepier the more you think about it—is this:  Tom had unrequited feelings for a woman named Shasta.  She marries this guy named John.  Years later, John kills Shasta & then disappears.  Tom searches for John in order to get revenge (? Is that even the right word in this case? I mean, he’s just some guy who was crushing on Shasta.  I don’t know that he has any sort of standing to get revenge.  Maybe justice would be the better word.) By the time John turns up, he’s dead.

So Tom does the logical thing, & kills himself so that he can kill John again in Purgatory.

Powers is one of the best at unique fantasy (urban fantasy in the broad sense of the word, I suppose, though his writing prefigures the current UF trend).  And his conception of the afterlife will not let you down.  This is great stuff.

Unfortunately for me, I just didn’t care about the protagonist.  Why was he doing this?  None of that made sense to me.  This is a guy who needed friends to talk him down.
Posted by Burgoo at 9:11 AM