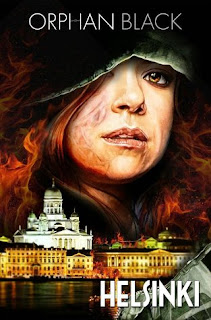 There are several different approaches to doing tie-in comics.  As far as I know, the approach taken in Orphan Black: Helsinki is new to me.  What they have done is to tell a new story in the world of Orphan Black that occurs in the margins of the primary narrative.

As the title indicates, this is a story that takes place in Europe.  And for the most part, it involves characters that are new to this book.  New clones! New clones!

There are a few characters that you will recognize, and the larger world dynamics are still the same.  But it’s taking advantage of the great world building of the show to tell a new story.

I thought it was great.

If you haven’t seen the show, you’ll probably be pretty confused.  But give it a chance.  If you like this world & this style of storytelling, you will like the show.
Posted by Burgoo at 12:20 PM