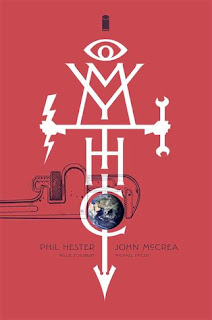 What if myths actually told the true story of how the world works?

In this world there’s a secret team called MYTHIC that makes sure that the world keeps working properly.

Unfortunately there’s another shadowy player who wants to bring about the end of the world, and they are killing the MYTHIC teams that get in their way.

This is a fun concept, but one that is just a bit under-cooked.  And to my taste, it ignores some of the more interesting questions in order to focus on a plot that just didn’t interest me.  If myths explain the world, then why does any science work? It’s not all magic.  And why did the people of the world ever move away from their religious explanations? Who is keeping all this secret and why? Who pays for the MYTHIC team? Why do immortals wear suits that are the envy of Dr Venture?

So it’s not that anything here was BAD, it just wasn’t exceptional, either.  I never really cared enough about the plot or the characters to make it appealing.
Posted by Burgoo at 11:01 AM