What Is Funnier Than Black Death? 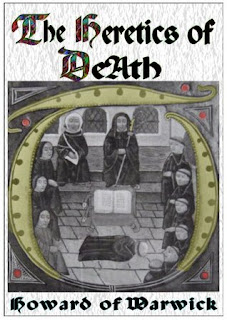 Howard of Warwick “The Heretics of De’Ath”(The Funny Book Company, 2016)

I would guess that most readers are familiar with some sort of medieval mystery, even if it’s just watching the movie version of The Name of the Rose.

In my experience they seem to usually have a monk who inexplicably uses modern detective procedures to solve a murder.

Well, The Heretics of De’Ath is one of those mysteries, blended with Being There, and with heavy doses of British comedy thrown in.

In fact, it is so dependent on the humor that I don’t think that it really can be read as anything else.  It’s clearly not about the murder mystery or any examination of religion or medieval life.

So then, we have comedy.  What did I think?

Well, it really didn’t work for me.  It was all just a bit too much.  Like a guy at a party who is trying too hard.

Of course YMMV.  That is really the nature of comedy.  I’m sure that some people find this to be side splitting.
Posted by Burgoo at 9:41 AM