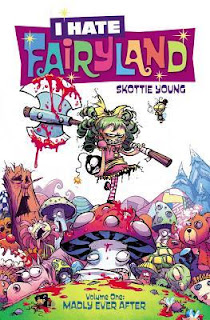 Skottie Young has made a name for himself in the last few years, primarily from his work on variant covers but also from titles like Rocket Raccoon.  He has a singular style, which is to my eyes the comic equivalent of a Funko Pop figure.  Characters become more childlike and quite frankly are just cute as hell.

Fairyland is his creator owned project and the first thing that I know of where he is credited as a writer. It’s a basic portal fantasy with a twist.  Gertrude wishes to go to Fairyland when she’s a little girl.  Unfortunately, she ends up trapped there in a body that doesn’t change even as she’s emotionally and intellectually growing older.  She becomes increasingly angry and bitter and the comic is more or less her attempt to destroy Fairyland.

This is an extremely one note comic. And in 2016, when it seems like just about everything has been deconstructed, I don’t even think that it’s very original.  Quite frankly The Magicians deconstruction of Narnia and Potter was more interesting.

I felt like Fairyland was a case of Young working out his demons.  It feels mean spirited, like he’s just sick of having to be the guy who draws “cute” covers. I get it.  But I’d rather read a comic where he tries a different style than one where he pisses all over the work he’s done.
Posted by Burgoo at 10:15 AM