But What About the Whole Story? 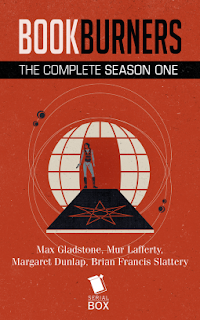 Some time ago I had the opportunity to read the first 3 installments of this serially told story.  Now I am able to read the “rest of the story” as Paul Harvey would say.

For a quick recap, Bookburners is an installment based story written by a variety of authors. I suppose I think of it like a TV show with weekly episodes each written by different people. Our heroes are a secret group working for the Vatican who travel the globe and try to contain (& bring to their secret library) various books that actually are magic.

The more that I think about Bookburners as a whole, the more things that seem to bother me.  For such a lengthy piece, there’s surprisingly little character development.  While some characters are explored, others are never really taken out of the box.

Second, the concept itself feels a bit tired and dated. While it’s not bad on its own, it does just seem like a dozen or so other things I’ve read or watched on TV in the last year or so.

Finally, there just wasn’t a compelling plot forcing me on to the next installment.  In order for something like this to really work, it has to have a forceful, compelling plot.  And I just didn’t feel that.  Perhaps structurally there were not enough cliff hangers between installments? Anyway, it made it way too easy to put down.
Posted by Burgoo at 12:08 PM