The Dream of a Bridge 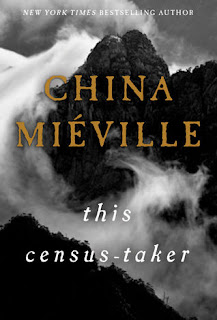 If I were to bother with doing SFF power rankings, China Mieville would be near the top.  He’s one of the writers that you can give to your MFA friend sure that the technical elements will be strong enough to keep your friend interested.  I tend to think of him as the 21st century Gene Wolfe, writing dense challenging texts that can be dense and impenetrable or exciting (or both).  He seems to move around the genre, tackling different styles and concepts with each project.

This Census-Taker is a step back to what may be the central area of Mieville’s world, the Weird.  A boy, now a man, tells us of his past and who he is.

Of course this IS China Mieville, so things are unsettling as both vague and specific.  Tenses change continually.  I found myself struggling to contextualize and make sense of the narrative.  What was actually happening? How much was due to having an unreliable narrator?

Unfortunately I found this one of Mieville’s books that I just bounced off of.  I found it impossible to form an emotional connection to the story, or to really even care about what happened.  It’s a beautiful technical piece, but one that I found less than engaging.
Posted by Burgoo at 9:31 AM