You Can't Choose Your Family 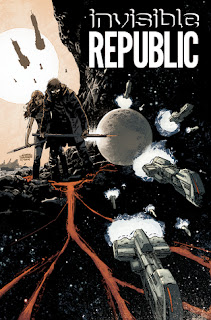 Invisible Republic seems to be a story of family and politics set on an impoverished moon.  I say seems to be because this is only the first volume, and quite frankly the plotting is rather slow.  So there could be some big twists and turns coming down the pike, and we just don’t know it yet.

The framing story is concerned with a discredited journalist who stumbles upon the scoop of his career: the diary of the cousin of the deposed despot.  This memoir seems to tell the unknown and rather sordid backstory of Arthur McBride. Unfortunately there are other forces at work here, and other people interested in this document…

But the heart of the story, at least in this volume, is how Maia and Arthur come to the city, and how the revolution seems to start.

Corinna Sara Bechko does a fabulous job on the art.  There is an amazing amount of detail in virtually every frame.  For a comic with a fairly large cast of characters, she manages to keep all the faces distinct and recognizable.

My only complaint about this book is why make it a SF story? Why not just set it in a fictional country anywhere in the world? By the end of the first volume, I don’t really see any elements that say that the story should be SF. I’d like it to be a bit more fantastical.
Posted by Burgoo at 8:20 AM