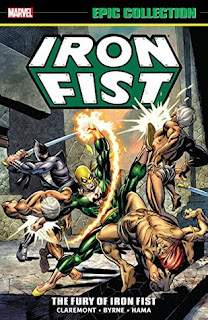 This is grindhouse comics at their best!

Straight out of the 70s it’s Danny Rand, master of the “Iron Fist”, in NYC, looking for revenge and later trying to be a hero. Crazy action with nepharious billionaires, gimmicky fighters, ninjas, & more!

Several things jumped out at me: first, you have to acknowledge the problematic nature of the white explorer finding the mystical Asian city trope.  And of course, this white kid is the best at what they do.  That’s a problem.  (I’m interested in seeing what the new TV series does with this.) But hey, there’s a very diverse assortment of characters.  We meet Colleen Wing & her dad, Professor Wing.  Colleen is Japanese, so she’s got ninja skills, not to mention that she mind melds with Danny fairly early on in the series.  So she’s more or less his best friend. We also get to spend time with Misty Knight, former cop turned private detective with a robot arm.  Yeah, it’s that kind of a series.

Keep in mind that this is a mainstream comic from the 70s, so the storytelling is much more episodic that you might expect.  But it’s a hell of a lot of fun.
Posted by Burgoo at 8:52 AM