The Jewel at the Heart of the Universe 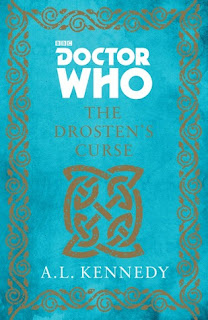 This may be the best Doctor Who novel that I have read.

Apparently there’s an ancient infinitely powerful telepathic alien under a golf course.  Four gets involved in the mess, along with a couple of temporary companions – an young woman who works at the resort, and an alien bounty hunter who happens to be a clone. (Yes, it is all rather complicated and confusing.)

There’s some seriously creepy stuff here.  Strange twins who are close but not quite humans.  Octopus monsters that live under sand pits.  Mind control.  Attacks on the TARDIS itself.

Kennedy’s skill is what keeps this from being a true horror story.  Tonally the book is in keeping with the tradition of English humorous writing – Adams, Pratchett, etc.. The tone is light and dry, keeping the horror elements from overwhelming the story.  Sure, there’s dramatic tension, but overall the story is fun.  That’s what I want from my Doctor Who stories.

Email ThisBlogThis!Share to TwitterShare to FacebookShare to Pinterest
Labels: a l kennedy, books, doctor who