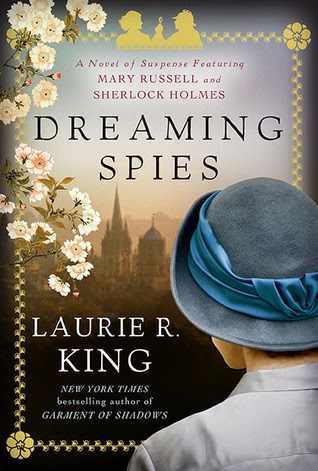 An advantage of a long running series like King’s Russell Memoirs is that you have the time and space to stretch out and explore questions and situations that otherwise would be seen as tangential to the core of the stories.  For example, what fan of Sherlock Holmes hasn’t wanted to see Holmes in a non UK setting?

It may be simplest to think of Dreaming Spies as King’s Japan book.  The plot centers on a favor that Holmes & Russell did for the Japanese throne some years earlier, when they were in Asia.  There is a framing story set in Oxford, but the bulk of the narrative occurs in flashback.

I think that reviews will be split over the pacing of this book.  I’ve never read a book with ninjas that had so little action.  This is not a fast, action packed narrative.  Instead it seems to be an opportunity for King to explore portions of Japanese culture that interest her.  It’s rather contemplative.  Personally, I’m interested in Japanese culture, so I was thoroughly entertained by these leisurely strolls.

Dreaming Spies was a wonderfully entertaining book for a cold winter night.  It’s comfortable like a good conversation with an old friend.  Absolutely delightful!
Posted by Burgoo at 10:27 AM