Just Use the Word Already! 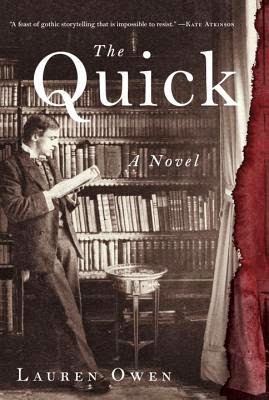 It’s a bad sign that my immediate reaction to The Quick is to tell you about other books.  Jonathan Strange & Mr. Norrell seems to have set the bar high for revisionist Victorian tales of the fantastic.  Of course there are a host of writers & novels that approach genre tropes from a literary angle.  That’s probably more a case of pick your poison rather than determining the one that is the most typical.

The Quick starts off telling a very Victorian tale of two siblings who grow up on a great house in decline.  The brother and sister are separated eventually.  He is sent off to school, while she lives with an elderly relative.  Later, he moves to London, where he falls in love and eventually runs afoul of a nasty group of vampires.

Oops! Was I not supposed to use that word?  Maybe not… Owen seems to go to great pains to avoid the word.  Why?  I’m not sure.  Even in-book, characters seem to be aware of vampires and have a tradition of stories about them.  Like our world, these creatures are thought of as beings of fiction and folklore.  But there doesn’t seem to be any discussion of “they can’t exist” or what have you.  The avoidance of the word seems to be more designed to distance The Quick from its low rent genre cousins.

Unfortunately, those embarrassing cousins have a few things right.  If you’re writing a Victorian pot boiler, make the pot boil!  Give us real tension and action! If you’re giving us characters, make some of them likeable!  Owen’s narrative choices mean that we spend far too much time in the heads of unlikeable or at best irritating characters.

What sounds like an interesting exploration of Victorian London rife with monsters somehow turns into a boring slog.  It lacks the courage of its own convictions.  Perhaps next time a stronger embrace of genre elements would make for a more compelling tale.
Posted by Burgoo at 7:34 AM