Did You Say Teen Police? 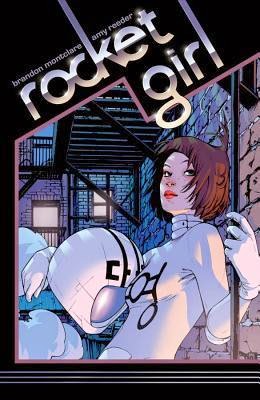 In a parallel 2013, a member of the New York City Teen Police travels back in time.  She’s acting on a tip from a mysterious source trying to make a change in the timeline that will prevent her present from ever occurring.

The good news:  Rocket Girl has a vibrant, dynamic look.  It skillfully integrates the familiar (NYC in the 1980s) with the new and fresh (future technology, alternate realities).

The bad news:  Characterization is not what it could be.  Dayoung Johansson is sympathetic because she’s the protagonist, not because she really earns our sympathy.  And the supporting cast seem to be more outlines than actual characters.  The plot is confusing at best.  Why is Johansson so invested in this is the first place?  What is actually going on here?

I wouldn’t say that Rocket Girl is a bad book.  But without some significant improvement in a future volume, I would not bother to check out its future.
Posted by Burgoo at 10:42 AM