Under the Moonlight, the Serious Moonlight 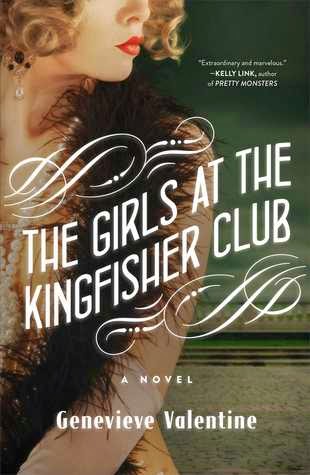 Genevieve Valentine “The Girls at the Kingfisher Club” (Atria Books, 2014)

I have to confess that I was unfamiliar with the source material for this novel.  It’s based on “The Twelve Dancing Princesses”, a Brothers Grimm fairy tale.  (Of course my wife told me it was one of her favorites, so maybe I’m just out of the loop.)

As the Brothers Grimm tell the tale, it focuses on the King, who is concerned because his daughters keep wearing out their shoes.  While clearly it would cost a small fortune to keep 12 princesses shod, I doubt that the cost justifies hiring a man to follow and investigate his own daughters.  Yet that is just what the King does.  And when the man is successful with his intelligence gathering, the King rewards him by marrying him to one of the daughters. So to modern eyes it is kind of creepy and treats the princesses like someone’s property.

Valentine changes the setting to America during Prohibition, and she tells the story from the perspective of the daughters.  The princesses are the daughters of an American would-be robber baron, a man who wants to be with the Roosevelts, Carnegies, etc, and puts a certain amount of blame for his failure on his lack of a suitable son.   His daughters are confined upstairs with only the servants and each other for company.  Eventually they start slipping out at night to dance in the speakeasies around New York.  Their struggle for freedom versus their father’s struggle for control is the central conflict of the novel.

Valentine does such a great job with this novel.  Despite the large cast of characters, she manages to deftly juggle all the sisters to the extent that I felt I had an idea of the similarities and differences between them, as well as their relationships.   The world building is limited, but that is fitting given the story.  The sisters’ world is largely limited to their rooms at home and the clubs where they dance.  And so is the world of the book.

There’s a point at which it feels like nothing is really going to happen.  The sisters will go dancing and avoiding their father.  Then suddenly their father decides to make changes which inevitably change the status quo.  From this point on, the novel is tight and tense, as I was deeply invested in the sisters and their struggle to be happy.
Posted by Burgoo at 8:54 AM