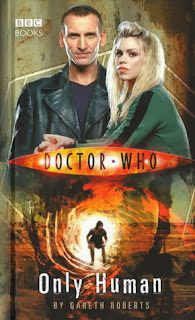 
The Doctor (Nine), Rose and Captain Jack arrive in modern London to determine who has been tampering with time.  When they discover a Neanderthal, the Doctor realizes that they will have to go back thousands of years to find the culprit.

At this point the narrative splits. One strand concerns Das, the Neanderthal, and Jack, who the Doctor has tasked with integrating Das into the modern world.  This is clearly a secondary plot line that is mainly played for laughs.  The meat of the plot occurs when the Doctor and Rose go into the dawn of history and discover travelers from the future who have their own agenda.

The tone throughout is light and humorous, as you might expect from the writer of “The Lodger”.  Sure, there’s a certain dark undercurrent, but more often than not I found myself laughing at the book.  Even though I generally think of Nine as an angry Doctor, here he feels more light hearted and closer to Ten in temperament.

While I don’t think that Only Human would necessarily appeal to someone who was not already a fan of the show, I found it to be a very enjoyable light and humorous read.
Posted by Burgoo at 11:55 AM