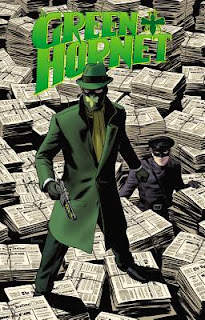 Mark Waid & Daniel Indro “The Green Hornet, Volume 1” (Dynamite, 2013)
As you may remember, the Green Hornet is a rich businessman by day, masked crime fighter by night.  He and his servant Kato prowl the streets and alleys to stop a variety of crimes.

Mark Waid’s start to the character is a tragedy in the classical sense.  The Hornet’s real adversary in this volume is himself.  This is a sophisticated start for a run on a comic, one that we don’t often see.  In fact my only real critique comes from Waid’s approach.  It’s all predicated on the fall of the hero.  Yet with a pulp hero like the Green Hornet, the reader just isn’t as invested as in a more contemporary hero.  Perhaps a better approach would have been to have this as a second story arc.  The first would be all about generating sympathy and investment in the character.  As it now reads, my response was more one of “well, he’s an ass” than shock or dismay or any of the desired responses.

Daniel Indro’s art is consistently strong throughout the run.  He chooses to avoid the clichéd superhero look and go for a more realistic approach.  While maintaining this aesthetic, he still manages to draw effective action sequences.  It’s a great approach to a pulp character, reminding us of the fundamental differences of his world, while still conveying the information that we need.