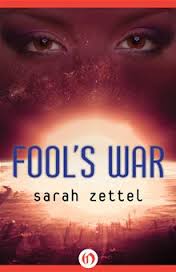 There’s been quite a bit of talk in the last few years about the gender imbalance in SF.  It can be difficult to find quality books written by women.  If you’re short on reading material, Open Road Media has recently republished Sarah Zettel’s Fool’s War as an ebook.  Fool’s War was originally published in 1997, and was a New York Times Notable Book of the Year.

Initially, Fool’s War seems to be space opera.  We meet Katmer Al-Shei, owner of a small freighter, who is struggling to earn the necessary cash so her family’s dream of a large ship (where they can be together) can be realized.  As the story progresses, it becomes clear that the real story is not about moving interstellar freight and data, but rather about the emergence of artificial intelligences, and how that will impact all of known space.  It’s really impossible to discuss plot specifics without massive spoilers, so just rest assured that Fool’s War is tightly plotted, with plenty of twists and turns that are both exciting and surprising.

One of the major themes of the book is prejudice and persecution.  We’re presented with three different groups who have to deal with this:  the Muslims, the Freers, and the AIs.   The Muslims are disliked because of a major bombing some 500 years in the past.  The Freers face prejudice because of their philosophical/religious beliefs that humans should live in artificial environments and their pro-AI stance.  Artificial intelligences are hated and feared because the damage that they have caused on becoming emergent in existing networks.

It’s refreshing to see Zettel’s portrayal of people of faith.  So often SFF depicts character’s religious beliefs as some sort of personal flaw at best, or blind fanaticism at worst.  Katmer and the other Muslim crew members are portrayed as complex individuals, whose beliefs are simply one aspect of their personalities.  It’s part of their daily lives, just as it is for millions IRL.

Fool’s War was an exciting space based SF adventure with strong female characterization.  While some of the AI storyline read as a bit dated, so much of the characters resonate more strongly now than they did in 1997 when this novel was first published.
Posted by Burgoo at 9:04 AM