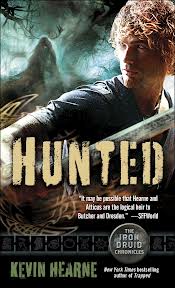 One of the great things about the Iron Druid series is how every book matters.  Not only do characters from earlier books return, but Atticus’ actions in one book influence how these characters feel about him later.  Actions have repercussions, sometimes expected and other times surprising.

The vast majority of Hunted is an elaborate chase sequence as Atticus, Granuaile and Oberon try to cross Europe while evading the pursuit of Artemis and Diana.  They’re upset about how Atticus has trapped Bacchus.  All of the easy avenues of escape are closed to the Druids, so it’s a foot race.  And the goddesses are being helped by vampires and dark elves.  And don’t forget Loki, who wants to kill Atticus himself.  The gods are using this as a betting opportunity, so our favorite Druids are on their own with just their wits and skills to protect them.

Everything you like about the series is here:  fast paced plotting, laugh out loud humor, sausages!  The plotting is too dependent on knowing characters from earlier books to make this a good starting point, but if you’re a fan of the series, you’ll love this one.