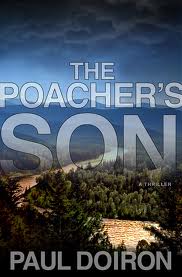 Often contemporary mysteries seem to use the plot device of a murder as more of a macguffin than as any actual whodoneit.  In this case, there’s a murder whose investigation allows for the exploration of the setting and the characters of the novel.
I found the setting to be very interesting and well developed.  The world of northern Maine, and the routines of a Game Warden there, makes for unusual and intriguing reading.  Doiron does an excellent job bringing the reader to this area that almost seems to exist in another time.  Its physical remoteness necessitates a sort of living in the past, as so many modern conveniences either won’t work, or are simply impractical in this environment.
I found myself less satisfied with the protagonist.  He’s a terrible investigator.  He doesn’t seem to be particularly good at his actual job (Game Warden).  He consistently makes terrible decisions.  And to top it off, he’s a jerk to everyone.  Several characters try to reach out to him (his estranged girlfriend, his boss, townspeople), only to be pushed away.  At this point I was not as surprised by his actions as much as I was by theirs.  Why bother with this guy?  His only redeeming feature seemed to be that he was the protagonist.
Posted by Burgoo at 1:31 PM