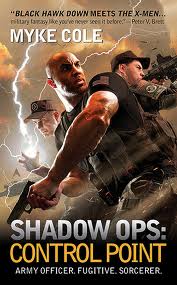 I was looking for SO:CP to be the book equivalent of a summer blockbuster.  Plot driven, lots of action, some mindless fun.  In a way, it did deliver that.  Cole does an excellent job with combat sequences, with building a vision of what the military might look like in this world.
Unfortunately, there are some major flaws in the book.  SPOILERS FOLLOW.

I won’t bother to go into the character problems with the Oscar, the protagonist.  They have been much discussed in a variety of reviews.  Suffice it to say, his actions and decision making did not seem to be consistent of what we had learned of his history.  So let’s move onto some other issues:

1.        Gender.  There are really only 3 female characters in the book.  Scylla, a sociopath who believes that Latents should rule the Earth.  Donner, who is consistently infantilized & portrayed as a child, incapable of making good decisions.  Finally, Theresa, the love interest, who is….well, the love interest.  She seems to be attracted to Oscar because he’s the protagonist. (& she’s the Madonna in the traditional dichotomy.  So all the women are one dimensional at best, and those single dimensions are horrible stereotypes.

2.       Colonialism.  There’s a subplot involving the US military invasion of the “Source”.  The native peoples, referred to as “Goblins” are either resisting or working on the US base, doing menial tasks in exchange for sugar.  In case you weren’t smart enough to make the connection yourself, there’s another subplot involving a separatist movement on a Native American reservation in New Mexico, just to make the connection explicit.  We only meet one “Goblin” , Marty, who’s the “kind & spiritual” native.  The resistance is portrayed as “savage and primitive”.  So only 1 actual character, but it’s all solidly a stereotype.

3.       Politics.  While the story explicitly tells us that the US policy of mandatory military service is wrong, that’s not what the story implicitly tells us.  The only articulate spokesperson for the counterargument is Scylla, the supervillan.  And emotionally, the reader is led to enjoy the government actions.  That’s the fun part of the book.
Posted by Burgoo at 7:37 AM