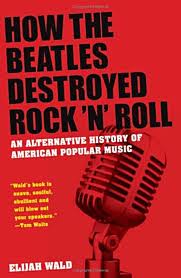 Relax boomers – this isn’t the 300 page takedown of the Beatles that you’re ready to hate.  What it is then, is a unique history of American popular music in the 20th century.  A sequel, of sorts, to Wald’s “Escaping the Delta”.

The argument in this case is that around 1965, music became more segregated, with black performers continuing the traditional interest in dance music, while white performers became more interested in art music designed for listening, not movement.  His claim is that this was to the detriment of both strands of music.

Wald’s approach is somewhat unique.  The usual approach is to construct a critical narrative.  From a position of hindsight, various figures deemed important and/or influential are highlighted to provide some sense of progress.  Wald views himself as a historian, rather than a critic.  Using sales charts and radio playlists he constructs a vision of what people were actually listening to, rather than what they *should* have been listening to.

The advantage of this approach is that it provides a more accurate reflection of what the times were actually like.  Yes, apparently Doris Day & Perry Como really were that popular!

And that leads to the downside of Wald’s approach.  There are long passages devoted to performers such as Paul Whiteman who is of little to no interest to contemporary listeners.  While Wald’s writing never falters, the fact that these performers are quite simply of lesser importance to modern ears makes these portions of the book drag.

The discussion of the 1950s was of particular interest to me in light of the current state of the music industry.  The split between albums and singles, both among audiences and performers, seems to mirror the emerging state of the recording industry.  Perhaps in a few years we’ll again find ourselves in that same situation.
Posted by Burgoo at 1:15 PM