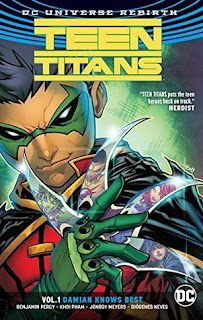 Rumor has it that Grant Morrison’s plan all along was to kill off Damian as he left writing the Bat books. He was created to fulfill a certain function in Morrison’s stories, never to be an ongoing character.  DC editorial stepped in and stopped this from happening.

Now given the mixed reactions to Grant Morrison, Damian Wayne, and DC editorial, any or all of this story could be apocryphal and meant to serve any one of a variety of purposes by the teller.  Still, the question remains, what do you do with a character that was born to die?

Here the idea is to plug Damian into the Teen Titans. It’s a ploy that has worked for a variety of Robins, so why not Damian?

With the “Classic” lineup (to my thinking, anyway) being used in the “Titans” book, “Teen Titans” is the more recent lineup (Starfire, Beast Boy, Raven, Kid Flash), with Damian filling the Robin role.

While there is a story of sorts here, it’s really about getting the team together, and introducing a nemesis for Damian, a cousin who stayed with the League of Assassins.  This is a VERY Damian centric story, and I have a say that I was surprised at how well I felt Percy wrote the character. And the introduction of him into a new setting gives him more of a reason to exist.

Meyers’ art is fun and fresh feeling. It must have been somewhat difficult to design, given the sheer amount of exposition necessary for this type of story, but somehow it never feels less than dynamic.
While working in an environment that is not my favorite by any stretch, I felt like this was a very enjoyable comic. Tonally it would work well for younger readers. It’s a good start to a promising series.

Thanks to Goodreads and DC Comics for a free copy to review.
Posted by Burgoo at 10:28 AM