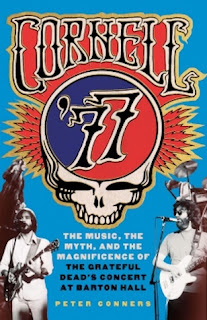 5-8-77 grew to fame and adoration because of the wide circulation of great sounding tapes of this show. What some of y’all don’t know is that back in the day, we didn’t have access to almost any show that you wanted to hear. You had the shows that you had. And they were on cassettes. And some of the sound quality sucked. (And we walked up hill both ways to get them in the snow!  OK I’m just kidding about that part). But this show from Cornell was spread far & wide in some great sounding tapes.

Best show of all time? I don’t know, and Conner doesn’t even really try to answer that.
Without cooperation from the band, he does a good job of telling the story of that night. He talks to some former students and folks who were at the show, and does a good job of fleshing out details that don’t show up on the tape.

I thought it was a lot of fun. Not earth shattering, but there were more than enough interesting anecdotes about that evening to make this worth my time.