It's Certainly not Styx 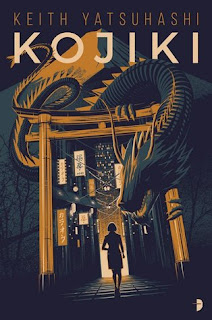 Normally I am not a fan of the secret heritage trope.  You know the one.  It’s usually a character who upon “coming of age” finds out that they are secretly the heir to the throne/chosen one/whatever.

But this is the exception that proves the rule.  The reason is that the world of Kojiki is so unlike any fantasy world that I have previously experienced.  It’s important to say that I know next to nothing about Japanese mythology.  The world of Kojiki gives the feel of a world that is based heavily on Japanese mythology.  It is in fact? I have no idea. But it is complex and very different from the bog standard fantasy world.  Having this familiar trope (& plot structure) gave me something to hang onto while trying to make sense of this strange world.

Does it all work? I think that for me, at least, the results were mixed.  I found myself struggling more than I enjoy.  I honestly don’t know how much was me, & how much was the book.  But regardless, it was difficult for me to make sense of things at times.  At other times, I enjoyed the uniqueness and originality of this book.
Posted by Burgoo at 8:25 AM