Churning Out That Boogaloo 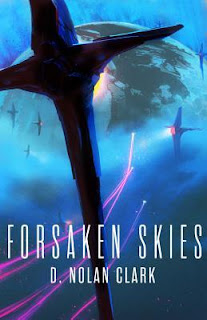 
There’s a small Mexican village that is plagued by bandits.  The villagers pool their meager resources & go to hire gunfighters to defend the village.  They don’t really have enough money for this, but an old fighter with a soft heart takes the job, & assembles a ragtag crew of fighters to help them.

Wait… that’s The Magnificent Seven.  But it’s also Forsaken Skies.  (And Seven Samurai, and…)  Hey I get it, it’s a great story.  That’s why it has worked in so many places.

So this is The Magnificent Seven…. In SPAAAAACE.  And to help make it a series, there’s a first contact story grafted onto this as well.  (The first contact part comes from Star Trek, though.)

So then the plot is solid, if a bit well worn.  What’s left?

The character work is sufficient, but not particularly in depth.  This is more about action & adventure.  And does it deliver?  I’d say so, though your opinion may vary based on how much you like descriptions of pilots during fight sequences.  I don’t know when I ever read so much talk about the details of flying fighter planes. (And these are just fighter jets in space).

Forsaken Skies was fun.  It’s not going to be breaking any barriers for originality or depth, but sometimes that’s ok.  I enjoyed it, & plan on checking out more in the series.