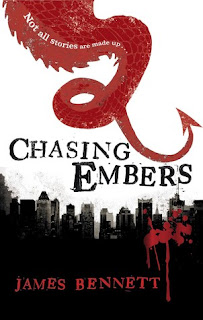 Maybe you are thinking that you are just tired of urban fantasy.  It’s been done to death.  You know both plots & quite frankly are sick of vampires and werewolves.

Allow me to tell you about Chasing Embers.  Sure, it’s urban fantasy, but it’s not like that other stuff.

The protagonist, he’s a dragon.  Yeah, a dragon.  Not a dude who is turned into a dragon, but a dragon who can turn into a dude.  And he’s not a detective, private or otherwise.  In fact, he’s not particularly any good at figuring anything out.  The plot’s not about solving a mystery.  It’s about stopping some seriously messed up people.  The plot and all the various motivations and machinations are slowly revealed as we learn how this world is different from our own.

And while there is a love angle here, it’ not in any danger of being called a romance.

While the core of the world building is set in Western Europe, I do have to commend Bennett for attempting to include some African folklore.  Unfortunately it felt at times like these elements were crashing into a book that comfortably sat in the European tradition. Hopefully that will be rectified later in the series.

On the whole this is a promising start to a new urban fantasy series.  There’s an intriguing world with interesting characters and lots of action.  There’s plenty of unexplored space in the world to build on in future books.  Recommended particularly if you are jaded on bog standard UF.
Posted by Burgoo at 9:26 AM