Not Just Another Magical London Story 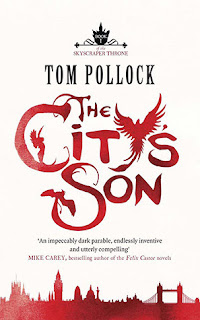 The City’s Son was originally published in 2012.  It’s being reprinted, which is why I got my grubby little hands on an eARC.  It’s somewhat important to keep that 2012 date in mind when you’re reading it, because it does provide a certain perspective on the book.

I can hear you now “ANOTHER magical London book?” And yeah, that’s why it’s important to remember that it was originally published in 2012.  The idea wasn’t as played out then.

So that’s the big down side to this book.  But really it’s the only one.

And it’s only at the elevator pitch level that this book really seems too similar to all the other Magical London books.  Pollock stubbornly eschews the now cheap reveals (“not homeless – magic!” “not an abandoned building – magic!”) And instead goes for a much more ethereal yet grounded vision.  Elements of the city itself make up the physical manifestations of these supernatural beings.  Yeah, it’s very very cool.

To top it off, Pollock does have some writing chops.  Now this is a YA novel, so keep your expectations appropriate. But he’s a fine stylist who can tell a good yarn.  There’s an urban energy and feel to this book that is so appropriate to the story it tells.
Posted by Burgoo at 8:55 AM