From the Department of Different Stuff 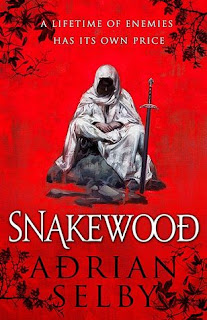 This is clearly going to be a divisive book.  It’s not that the concept is so off putting—someone is tracking down & extracting revenge on a group of mercenaries.  That’s fairly standard post-Abercrombe stuff, right? My initial reaction was that it reminded me of Crown of Cold Silver, a book that I enjoyed last year.  You know, it’s all about being old now, but getting the band back together.

No, it’s major choices in his approach to storytelling that are going to generate the controversy.  Selby chooses to tell his story through flashback & by allowing the reader to read a variety of documents that tell the story.  It’s a highly unusual choice, at least for fantasy.  I can’t think of another book that attempts this – the first comparisons that come to mind are John Bruner & Kim Stanley Robinson, who both use this technique to fill in world building, and also do so within a SF context.

I have to admit that I did not enjoy this choice. Often I find it difficult to find my footing in a new fantasy world.  This narrative choice created a greater distance between me (reader) and the characters.  At a point when I’m already working to assimilate the rules of the world, being separated from characters makes it harder to become invested in the story.

Adding to this (or perhaps counterbalancing for some of you), I found it a bit grimdark for my tastes.  I will say immediately that YMMV, but for me it was a bit over the line.  Perhaps it was that I was already struggling to emotionally connect with the story, and the violence made things worse.

As a positive (I know, maybe too little, too late) I do want to make sure that I mention that I thought that Selby’s use of “brews” as primitive means of biological warfare was really brilliant and unique.

I think that Selby has a great future, but unfortunately Snakewood just wasn’t for me.
Posted by Burgoo at 9:38 AM