If it wasn't for you meddling kids! 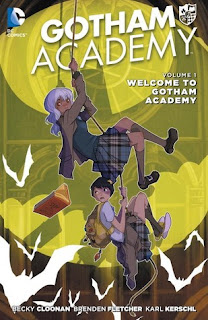 
In the past year, DC has tried to add some variety to their line.  Gotham Academy is arguably the biggest hit of that effort.  So what’s the deal, anyway?

Set in Gotham’s best boarding school (the titular Academy), it’s about a couple of young girls –forced together due to the school’s mentor policy—who investigate a “haunting”.  They live in Gotham, so actual ghosts aren’t totally out of the question.  Of course so are other things that go bump in the night.

What you end up with is a fun, fresh title that makes me think of Harry Potter mashed up with Scooby Doo – but set in Batman’s world.  It’s a big departure from the tone & style of their other titles, but it’s confident and successful.

My only complaint is that it is perhaps a bit too rooted in the “normal” world of DC comics. I would have been fine with mentions of Batman without ever actually seeing any Bat characters.

But if you’re burned out on contemporary DC comics, this is a very well done book that may just be what you’re looking for.