It was all going so nicely 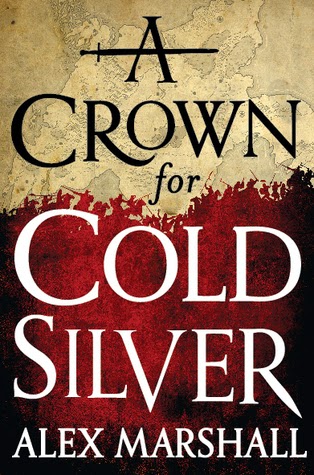 A Crown for Cold Silver is one of 2015’s most anticipated epic fantasy debuts.  Perhaps “debut” should be in quotes, because Alex Marshall is a nom de plume, so is it the author’s first fantasy?  Who knows.

Anyway this is a post-Abercrombie fantasy.  A big sprawling world with neer do wells who are looking for revenge, redemption, or a variety of other things. They are mean & nasty, but utterly captivating.

Marshall’s world is wonderfully complex.  Strange religions, complex governments and cultures.  Somehow all of this was created in a story that seemed propulsive and plot driven.

And the end… wow.  I didn’t expect that the story would go there.  It does a decent job of wrapping up the events from this book, while leaving me (at least) firmly on the hook for the next book.

My only complaint about A Crown for Cold Silver is that occasionally there were flippant uses of contemporary slang that knocked me out of the book.  It’s just occasional, but I would’ve preferred those to be removed.  Otherwise, I loved it!
Posted by Burgoo at 8:23 AM