Why Can't I Be a Normal Girl? 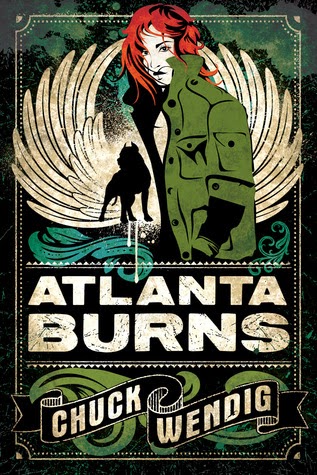 Atlanta Burns (a name, not a descriptive sentence) is a badass.  Her mom’s boyfriend tries to get all sexy time with her, so she shoots him in the crotch with a shotgun.

She’s a poor White Trash girl from the South who’s been transplanted to the North.  She’s a badass who tries to take no shit, but she’s still a teenager.  There’s some shit that everyone’s got to take.
This is in no way what I would expect from a YA novel.  It’s brutal and bleak.  There are dog fights, suicides, torture, and sexual assault.  Grim stuff.  Kids these days….

If you’re familiar with Chuck Wendig’s other books, you may have come to expect a certain level of quality.  Don’t worry, that quality is here.  We all should know by now that Wendig can tell a damn compelling story.  Atlanta Burns shows that he can still tell a great story even if he leaves the fantastic behind.
Posted by Burgoo at 9:51 AM

Email ThisBlogThis!Share to TwitterShare to FacebookShare to Pinterest
Labels: books, chuck wendig, ya