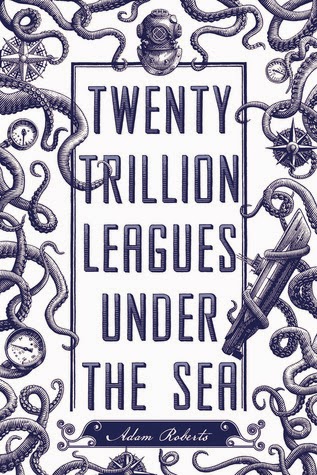 For those who aren’t familiar with him, Adam Roberts is a very postmodern writer.  His books tend to be full of riffs on other texts.  They are not so dense as to be unenjoyable without understanding the references, but it certainly helps.

As you might expect, Twenty Trillion Leagues Under the Sea is a riff on Jules Verne.  The year is 1958 and the French are launching the nuclear submarine Le Plongeur.  Everything goes great until it all goes horribly wrong, and the submarine goes plummeting deeper and deeper into the sea.  It plummets so deeply in fact, that it may no longer be in the same sea.

There’s a claustrophobic feeling that emerges from this book, one that is necessitated by the action occurring in a tiny metal capsule.  Characters are pressed together and their fears and secrets exposed.  If you are looking for a book with a lot of action, this book isn’t for you.  Most of the book consists of people talking in close quarters.

In fact, the style of the book means that its true audience is destined to be small.  There are no women in the book.  The emphasis is on ideas, like in a Golden Age story.  Only the emphasis isn’t on Hard Science.  Rather speculation about philosophy and religion is encouraged.  So the fans of Proper SF with Real Men practicing Hard Science will be unsatisfied.  And many of the contemporary literary fans will be unsatisfied because there isn’t much time spent on character development.

Personally, I thought that Twenty Trillion Leagues was a lot of fun.  In fact, I thought it would make for an excellent independent film.  So someone out there license this baby up, so that we can watch it.  OK?
Posted by Burgoo at 10:57 AM