The Duality of the Southern Thang 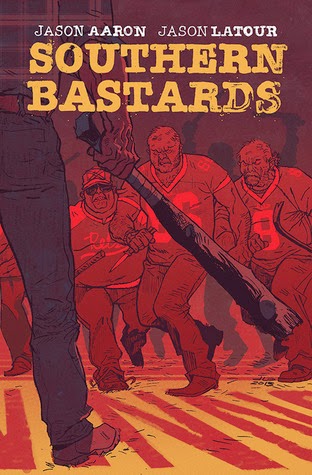 
When I first read the description of this book I thought, “great, a Walking Tall knock-off”.  A guy comes back to his home town, finds out that it’s been corrupted and starts knocking heads.  I suppose in a sense that that’s still true.  But it sells Southern Bastards short, because the book is so much more than that.

The Jasons have planted their flag firmly in the camp of Southern Gothic.  This little Alabama town is full of broken and misshapen people who are scraping by.  Well, except for the Coach.  He’s a grotesque in another way, an example of excess and indulgence.  The irony is that he seems to be ultimately uninterested in anything but his football team.  His control of the town is purely for the ends of running his team properly.

What makes this exceptional is that there is a clear sense of love for the material.  Despite the violence brutality and perversions, underlying all of it is a sense of understanding and love.  And if you’re not from the South, you may not understand.  But they aren’t mocking the people of Alabama.  Ultimately there’s a sense of acceptance even as there’s frustration and at times hatred.

Southern Bastards is a violent nasty piece of work.  It’s also utterly compelling and I can’t wait to find out how the story continues.