The death of billions is as nothing to us Doctor 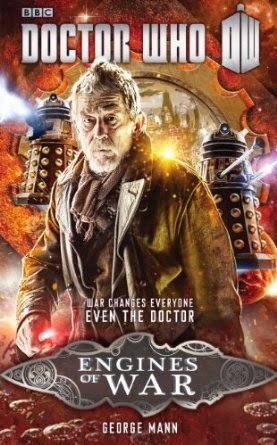 George Mann has been given an exceedingly difficult assignment.  Write the first book about the adventures of the War Doctor.  Keep in mind that we only know hints from other doctors, and what was shown on the anniversary special.  The special that only told the very end of the War Doctor’s story.

The problem then is how to write a story that feels like the Doctor, but doesn’t feel like a generic doctor. Mann has written other Who novels, so the basic concept is simple enough.
Did he pull it off?  I have to give him a mixed score.  The story itself is solid enough. The Doctor discovers that the Daleks are developing a new temporal weapon that they can use to wipe out the Time Lords and everything they’ve ever done.  He has to stop the Daleks while dealing with less than helpful Time Lord culture on Gallifrey.

The Doctor, unfortunately does not seem as distinct as I would have liked.  There are a couple of moments where he seems angrier than usual, but for the most part I think that we could have substituted another doctor into the story & had everything work the same way.  Perhaps I’m judging harshly and no one could have given a distinct War Doctor.  But that seems clearly what the goal should be.

Another issue that I have is the treatment of Cinder, the book’s companion.  She’s a young woman raised during the war by a resistance cell.  We are introduced to her as a tough fighter.  Killing Daleks is what she does.  Yet later she’s abruptly captured and tortured on Gallifrey, of all places. Not only is this a violation of her character, but it is not even used for any real dramatic purpose.  Why is she treated this way?

On the whole, Engines of War was a fun read and an entertaining look at a rather mysterious period of Doctor Who.  Who doesn’t want a glimpse into the Time War?
Posted by Burgoo at 8:33 AM