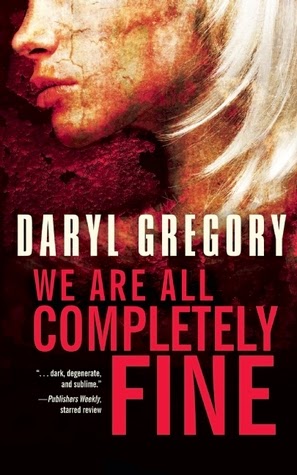 Daryl Gregory “We Are All Completely Fine” (Tachyon Publications, 2014)

What happens after the final reel of the horror film has played out?  The monster has been killed for the final time.  The police and ambulances have come & gone.  What happens to the survivor?

We Are All Completely Fine is all about the survivors.  Years after their respective stories, the lone survivors meet in group therapy.  PTSD is perhaps the least of their problems.  We have Stan, who survived a cannibalistic family (a la Texas Chainsaw Massacre), Martin who insists on wearing glasses that allow him to see the monsters (They Live), Barbara who was mutilated by a fetishistic killer (basically every serial killer movie ever), Harrison the former teen monster killer (maybe 80s vampire movies or a gender flipped Buffy), and Greta who wears long black clothing to cover the intricate scars that cover her body.

At this point a less talented writer would have probably told the obvious story.  It would have been an anthology style story where we learn the backstory for each person.  Perhaps at the end we’d find them all facing a threat – maybe the therapist?—that they would need to work together to overcome.
Fortunately Daryl Gregory has some chops and a great imagination.  In a sense all of that happens.  But not at all like this.  Gregory does tell us the backstories, but they are not told like horror stories.  The intent is not to provide the reader with scares.  Rather the horrific stories are told in the service of character and voice.  And tonally, he writes not like a horror writer at all.  The tone is light and humorous.  This keeps the story from getting drug into some sort of torture porn.  The pages fly by and the story is over before you realize it.

Perhaps surprisingly, We Are All Completely Fine is outrageously entertaining.  My only complaint is that it is just a novella.  I could have easily read a longer work in this world.