There's a few hours that I'll never get back 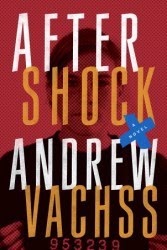 It’s probably been 20 years since I last read one of Vachss’ novels.  I remember being enamored of the total stylization, even as it sometimes bordered on self-parody.  But how will it all hold up?  There’s a good chance that the suck fairy will visit this guy.

Aftershock is the first in a new series.  Dell’s history (that we know) includes stints in the French Foreign Legion and as a mercenary.  He met his wife Dolly while she was nursing with Doctors without Borders.  Now they’re retired & living in a small Oregon town.  When the local softball star shoots up the high school, they get involved in order to clean up the town.
Dell is Burke without the cool scams.  The novel opens with him killing some hunters, because people shouldn’t be hunting near their house.  Vachss wants us to think it’s OK to kill these guys because THEY’RE HUNTING! So right off the bat I’ve got some problems.  Vachss is putting hunters into the narrative space that his earlier books used for child molesters.  One of these things is not like the other.

So anyway, Dell becomes obsessed with clearing Mary Lou even though yes, she did in fact kill this kid.  And no, Dell has never actually met Mary Lou, so basically he’s just interested in this because it’s necessary for there to be a story.  Ultimately he finds out that there is an organized ring of rapists who have been abusing local girls for years.  The system is failing these kids because the DA will not prosecute.  We don’t ever actually find out why they won’t go after the rapists.  We’re meant to think that it’s because the DA just won’t prosecute in cases that aren’t clear.  Why these rape cases don’t fit into that category?  I have no idea.  There’s physical evidence plus victim testimony.  Everyone in town seems to know what’s going on.

I feel like my IQ dropped multiple points just reading this book.

For a book at is about rape and rape victims, it strangely does not have any well-developed female characters.  They are cardboard cutouts who are waiting for our man (Dell) to come and save them.
Years ago I remember find the Burke books fun.  They were hard boiled and full of scams attacking molesters.  Now Dell is a murderous psychopath with PTSD who kills hunters and high school kids.  I know that some of the change is on my side of the book, but it’s not all me.  At least this was a quick read.
Posted by Burgoo at 8:44 AM