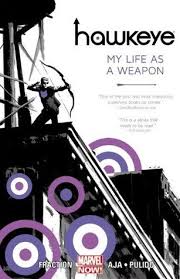 When I was reading comics back in the 70s, I was never much of a Hawkeye fan.  He always seemed to be the second most useless Avenger (I’m looking at you Pietro).  Underpowered, sort of a screw up, he was really a proto-emo superhero years before that label had ever been used.  So now I’m sort of amazed that I find myself enjoying a Hawkeye solo series.

The tagline says “this is what he does when he’s not being an Avenger”, and that’s a good summation of the book.  The majority of this book is Clint Barton helping out folks in his neighborhood, or accidentally getting into various adventures in NYC.  There’s also a short storyline with Hawkeye getting involved in international intrigue, but it’s more of a spy story, not a superhero story.  The stories are gritty, in that Hawkeye gets hurt—he’s got no superpowers--but not grim.

What about the character himself?  Fraction’s Hawkeye is much as I remember him.  He’s quippy, brash and bold.  Sometimes he makes stupid choices, but he faces the consequences of those choices.

The art duties are split between David Aja & Javier Pulido.  For my tastes, Aja’s work is the standout.  Simple lines, framing that is primarily close or medium provide intimacy that these types of stories deserve.  The coloring is muted, with palette choices that echo Hawkeye’s costume colors, even though he’s in street clothes for the entirety of this collection.

This is one of the best comics that I’ve read in years.  I’m very much looking forward to reading volume 2.