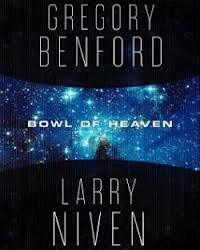 In the midst of their voyage, a troubled colony ship encounters a strange object, a bowl shaped structure half-enclosing a star, with a surface area many times that of the Earth.  The ship’s crew decides to investigate, both out of curiosity & in hope of restocking their dwindling supplies.  Of course the landing party encounters problems, with half being captured while the other half are hunted across the Bowl.

Early in their adventures, a group encounters a large animal emerging from water.  Amazed, they realize they are viewing a dinosaur.  In a nutshell, that’s my reaction to Bowl of Heaven.  For better or worse, it reads much the same as a hard SF novel from 30 or 40 years ago.

The strength of the book is the artifact itself.  An immense, self-propelled shipstar (yes, that is the phrase that is used) created from repurposing the mass of a solar system.  Extensively modified, it is home of seemingly hundreds of species and ecosystems.  Benford & Niven develop the Bowl in great detail and apparent scientific rigor.  Fans of SF built around BDOs are sure to enjoy the descriptions.
Benford & Niven provide insight into the people and culture of the Bowl via the use of Memor, an Astronomer of the Folk, as a POV.  Memor is tasked with observation and interaction with the captured colonists.  We learn about the Folk as she contrasts the colonists with herself and her people.

Given the chase/escape plot of most of this book, the story zips right along.  The colonists race from one danger to another, with their explorations providing an opportunity for the reader to discover and explore the strange world of the Bowl along with them.  It’s a simple devise, but in this sort of novel, where the location itself is the primary interest, it works wonderfully.

Unfortunately, while the object is so loving developed and described, the same cannot be said for our human protagonists.  Their side of the story is told primarily through the POVs of 3 crewmembers, Captain Redwing, Cliff Kammash, & Beth Marble, both biologists.  All three are little more than thinly constructed pieces of cardboard that function more as plot devices or as opportunities for exposition.  Who are they?  What are their motivations?  By the end of the book they were just as enigmatic as they were at the beginning.

In fact, by the end of the book, I seemed to have as many questions as I did upon the start.  Why were there no military or security personnel on the ship?  Were all the colonists primarily technicians of one sort or another?  Did they really expect to force their way into an alien artifact and not encounter any aliens?  Shouldn’t someone have mentioned that at the staff meeting so that they could plan for it?

Your enjoyment of Bowl of Heaven is going to be directly related to how much you enjoy certain types of hard SF as written 30 years ago.  Be forewarned, this is only the first half of a duology, with the second portion expected next year.
Posted by Burgoo at 5:41 PM