In Defense of: Mumford & Sons 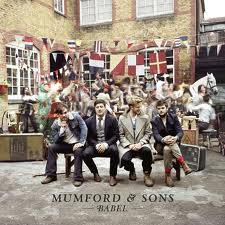 Mumford & Son's latest release, Babel, is on track to sell 600,000 copies in its first week (link).  This is a big deal.  It makes Babel the fastest selling release of the year.  Of course this also means that the inevitable backlash is just ramping up since their first album.  MetaCritic is currently giving the album a combined critical score of 65. Spin magazine has given Babel its "worst new music" tag.  Pitchfork has, so far at least, ignored the release.  I suppose that after the evisceration of their first album, they didn't want to bother.

Now I'm not exactly a fan of the Mumfords, but I have to ask, why all the hate?  It's not like the band is provocative, or confrontational, either in their music or their persona.  It seems to me that at worst, you would just ignore their music (like the common reaction to Dave Matthews).

In theory, here in 2012 we are supposed to be post-rockist, able to accept music on its terms without forcing a predetermined aesthetic framework onto it.  But the reaction to the Mumfords seems to put that to the lie.

Ann Powers of NPR has a great piece here about the band.  She notes quite rightly that they do not come from the transgressive tradition of rock music.  (And also astutely notes their connection in lineage from U2 et al).  In my mind, that makes them more in the mold of 60s pop singers or the Kingston Trio than the forced authenticity of the folk scare or the rebellious boomers of the latter part of the decade.  Yet if we are post rockist, why the insistence on forcing music to fit some template of rebellion?  And why is that not applied to such indie stalwarts as Bon Iver or Calexico?

Additional attacks come at them because they are not authentic.  Implied in these critiques is the sense that Mumford & Sons are, in fact, part of the folk tradition.  My own experience of their music is that they clearly are not.  They are a rock band that just happens to include a few acoustic instruments.  Structurally their songs are not part of that tradition.  And that's ok.  And again, in a post rockist world, are we really concerned with a bugaboo like authenticity?

In all honesty, I haven't spent the time needed to actually engage with Babel, so I think it's important for me to avoid speaking to the music itself.  But I am glad that people are connecting with music as more than background noise, whatever I eventually decide about the aesthetics of the album itself.  If music is a valuable cultural commodity, isn't it always a good thing when others are enjoying any form of music?

Email ThisBlogThis!Share to TwitterShare to FacebookShare to Pinterest
Labels: mumford and sons, music