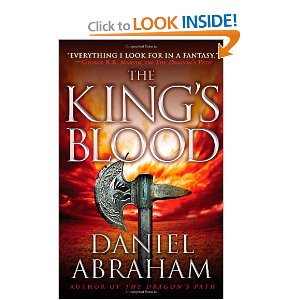 “The King’s Blood” picks up more or less where we left “The Dragon’s Path”.  The writing style & major POV characters remain the same.
Abraham does a great job with the moral ambiguity of some of these characters.  Because portions are presented from their POV, characters whose actions (& at times motivations) are repugnant become somewhat sympathetic.  I found myself liking the characters even while they did horrible things.
My major complaint is that this book is not enough of a stand alone novel.  I felt that “The Dragon’s Path” reached acceptable levels of plot resolution.  “The King’s Blood”, however, just seems to end.  It’s not that there are cliffhangers, it feels more like Abraham simply decided to stop once he got to a certain page count.  If you are reading this once the next novel in the series has been published, that won’t really be a problem.
Posted by Burgoo at 11:12 AM