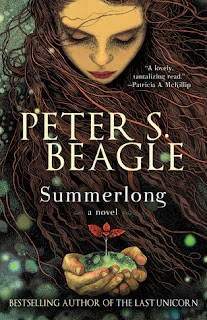 The first thing I noticed when I started reading Summerlong was Beagle’s total command of the language.  By the time I had finished the first page, I knew that this was a book that I’d enjoy. Mad skillz.  Sometimes you forget that there really is an elite level to this craft.  Peter S Beagle is a member of that elite group of writers.

Sumerlong is a modern fantasy. It’s so close to real life that it could pass as a “literary” title.  On a small island in the Pacific Northwest, a couple meet a younger woman who has moved to the island. After they invite the woman to live in their garage, some subtle but not normal things start happening.  Warm weather lasts longer than it should, there’s just a greater sense of life and vitality. Eventually they find out the woman’s secrets & learn why change has to come.

For the most part I loved this book.  There’s a great sense of place, and a small cast of very well developed characters. It’s a lovely fable.

However, there’s something that really bothered me, and it’s impossible to discuss without getting spoilery.

OK, eventually both of our protagonists find themselves cheating.  It gives me the same feeling that I have when I remember reading some of the NY literary novels from the 60s.  There’s a creepy sense of autobiography in play.  Now I don’t know anything about Beagle’s life.  But there’s a subtext here that feels like he’s fictionalizing an infidelity and subsequent dissolution of a relationship.  Did anything like that happen in real life? I have no idea.  But I definitely had a creepy sort of “uggh TMI” vibe going on.  Maybe it was just his skill as a novelist.  I don’t know.
Posted by Burgoo at 9:29 AM