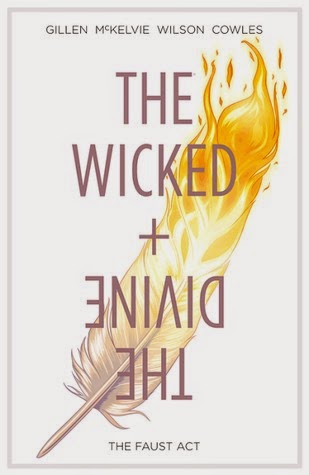 Kieron Gillen and Jamie McKelvie “The Wicked and the Divine volume 1” (Image, 2014)

For those keeping score at home, the linage goes something like:  Phonogram>Journey Into Mystery>Young Avengers>Wicked & the Divine.  For some of you, that may be all you need to know.  I know that it was for me.

Every 90 years gods come to Earth and walk among us.  They’re here now, living like pop stars.  We join the story in progress.  The gods are here and massive celebrities.  And then there’s a murder.  We learn about it through the eyes of an obsessive fan, who deals mainly with Luci(fer), a suspect in the murder.

As you may expect, volume 1 is primarily setup, so thematically it’s difficult to talk about WicDiv right now.  It’s safe to say that Gillen is once again dealing with issues of celebrity, magick, and pop culture.

Jamie McKelvie continues to impress with bold clean artwork.  The various gods contain visual allusions to numerous pop stars of our world (because of course they would).

There’s some irony in the fact that a book about gods and celebrities is being made by guys who are celebrities in their own world, whose creative process is more than a little magical.

The Wicked and the Divine is an exciting creative book, one of the best on the market today.  If you’re interested in the future of the medium, start reading Gillen & McKelvie.  Their work today is what others will be copying tomorrow.
Posted by Burgoo at 8:26 AM