For the Love of God, Can I Just Carve a Wooden Duck? 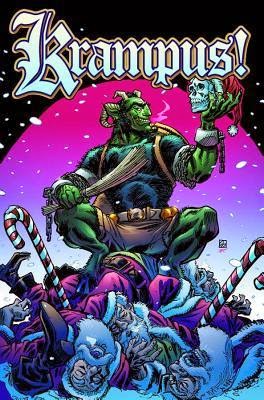 It’s December, and between the cookies, the brittle, and the Hallmark movies you’re suddenly seriously at risk for diabetes.  You need a little something to cut the sugar, like coffee with a donut.  You don’t want something mean, just something to take the edge off.  Those sugar shakes can be nasty.

There’s a set up that’s simple for anyone who’s ever watched a few Christmas specials.  The magic of Christmas is under threat because someone stole the skull of St Nicholas.  (Given the amount of threats to Christmas, it’s a wonder that it ever actually happens.)  The Secret Society of Santas (all the various cultural Santas from all over the world – and yes, they’re basically all dicks) are trapped at the North Pole, and they have to release Krampus to investigate.  He’s fitted up with a bomb that will go off if he tries to punish any kids (remember when I said they’re dicks?), and sent off to investigate.

What happens structurally is that Krampus now becomes a reluctant hero, instead of an anti-hero or outright villain.  This is important because this story isn’t a deconstruction of Christmas stories.  It’s just one that isn’t perhaps as sweet as what you might expect.

What we end up with is an action and intrigue filled story with Krampus travelling the world to save Christmas.

It’s fun, it’s funny, it’s the savory treat you need to balance all those holiday sweets.  There’s a tease for a second volume at the end, and I’m hoping that they go there.