Can she stick the landing? 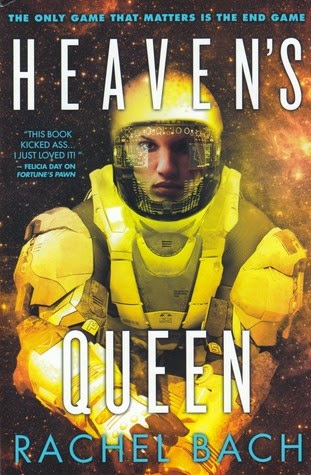 Now we come to the final book in Bach’s Paradox series.  The first two volumes, Fortune’s Pawn & Honor’s Knight, have developed a universe of action, intrigue and romance.  Deviana Morris is a strong kick ass heroine who just may be able to save the universe.  Because by Heaven’s Queen, those are the stakes – all life in our universe! Can Bach stick the landing, or will this series end on a sour note?
Bach wisely choses to forgo adding additional elements to the story in the final volume.  While many of the mysteries of the series were solved in the second volume, now we are watching things play out.  Will Devi lose her autonomy?  Will she be destroyed by her disease?  Is she the savior of the universe?
I’m happy to say that Bach does a great job managing the characters and the plot in order to reach a tidy conclusion.  While readers may or may not be pleased with the outcome of various events, they will not go away angry at dangling threads or unresolved character arcs.
Heaven’s Queen is a great conclusion to an action packed, romance filled series.
Posted by Burgoo at 8:33 AM